The world's stock markets are getting more and more integrated, as technology has made it possible for investors to more easily buy and sell securities traded on stock exchanges all over the world. ETFs, especially, have made it easy for U.S. investors to invest in stocks from all over the world, as there are now U.S. ETFs that track indexes of stocks from most stock markets in the world.

Unfortunately, there is not an agreed upon global standard way to identify securities from around the world. A simple ticker symbol is not sufficient, as ticker symbols from around the world are not unique. For example, symbol "1722" is Misawa Homes on the Japanese stock market and Taiwan Fertlizer Co. on the Taiwanese stock market. Read about this issue in our article what is a symbol?

Because ticker symbols are not unique, institutions and investors use one or more security identifiers to identify a security. Unfortunately, there are numerous security identifier systems in place, none of which are universally used.

The International Securities Identification Number ("ISIN") is a code that uniquely identifies a specific securities issue, under the guidance of the International Organization for Standardization (ISO). An ISIN is a 12 digit, alphanumeric identifier. The first two digits of an ISIN is the two digit country code based on the country of incorporation of the company that issued the security. You can lookup the two digit country codes using our countries of the world cheat sheet. The middle 9 digits of an ISIN reference a security's local identifier, while the last digit in an ISIN is just a check digit.

One challenge related to ISINs is that an ISIN identifies financial instruments at the global level only, so there is one ISIN for a specific issue of IBM common stock, no matter where it trades. If IBM trades on ten different exchanges in three different countries, the ISIN doesn't help that much, as the ISIN is the same, regardless of where it is being traded.

CUSIP is an acronym that refers to Committee on Uniform Security Identification Procedures. A CUSIP number is a nine-digit, alphanumeric number used to identify securities in the United States and Canada only. As explained above, for U.S. securities, the CUSIP number makes up the middle 9 digits of a U.S. ISIN. The CUSIP system is owned by the American Bankers Association and CUSIP Global Services, which runs the CUSIP system, is operated by a subsidiary of S&P Global.

CUSIPs have not not been adopted outside of the U.S. and Canada, partly because of the fees associated with CUSIPs. CUSIP Global Services carefully controls who has access to CUSIP numbers and lists of CUSIPs. You are not allowed to openly distribute lists of CUSIPs, without paying royalty or data fees to CUSIP Global Services. CUSIPs are treated as proprietary data, so that is partly why CUSIPs have never been globally adopted.

SEDOL stands for Stock Exchange Daily Official List, a list of security identifiers used in the United Kingdom and Ireland for clearing purposes. The numbers are assigned by the London Stock Exchange, on request by the security issuer. A SEDOL is a 7 digit, alphanumeric number. Unlike ISINs, SEDOLs are unique across countries and exchanges - if IBM trades in three different countries, there are three unique SEDOLs. Because of this, SEDOLs are popularly used for global, non-US securities. When it comes to international stocks, SEDOLs are the most commonly used identifier.

The Financial Instrument Global Identifier ("FIGI") is a 12 character, alphanumeric, randomly generated ID covering hundreds of millions of active and inactive instruments. FIGI's were created by Bloomberg, and then adopted as a global standard under the guidelines of the Object Management Group (OMG.org), an international, non-profit standards organization, founded in 1989. OpenFIGI.com allows you to perform searches and includes a programming api to lookup FIGIs.

Although Bloomberg apparently does not openly suggest that FIGI's should replace ISINs, Bloomberg believes that FIGIs are necessary because there are not ISINs in place for all securities. Bloomberg also wanted to solve the problem of an ISIN not being unique across the globe. So with the FIGI system, there is a unique FIGI for each security traded on an exchange -- so if IBM is traded on 12 stock exchanges, there are 12 FIGIs.

Bloomberg's FIGI identifiers are open source. You can freely use them and distribute them without paying any fees to Bloomberg. Although Bloomberg does not say this themselves, the FIGI system probably came about because of the high fees associated with the use of CUSIPs.

A CIK number is the number used by the U.S. Securities and Exchange Commission to identify companies that file reports with the SEC. So it is only used by securities traded on U.S. stock exchanges. We primarily care about CIK numbers because if you have a company's CIK number, you can lookup all of the company's SEC filings using the SEC's free EDGAR online website. For example, Amazon's CIK number is 1018724. You can see all of Amazon's SEC filings using this web address: https://www.sec.gov/cgi-bin/browse-edgar?action=getcompany&CIK=1018724&type=&dateb=&owner=exclude&count=40

On StockMarketMBA.com, we use the CIK numbers to create quick links so that when you pull up a security on our website, you can easily click to get a company's SEC filings, including financial statements: 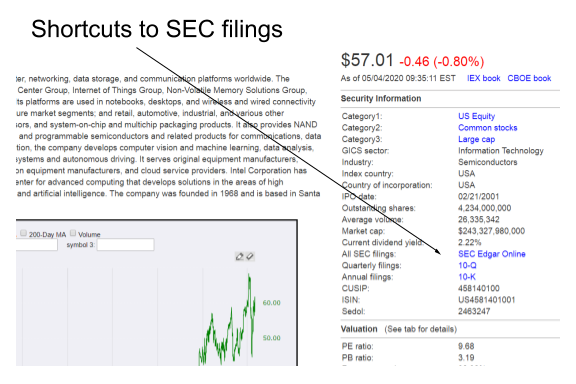